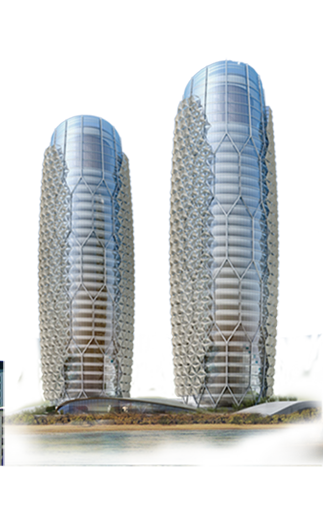 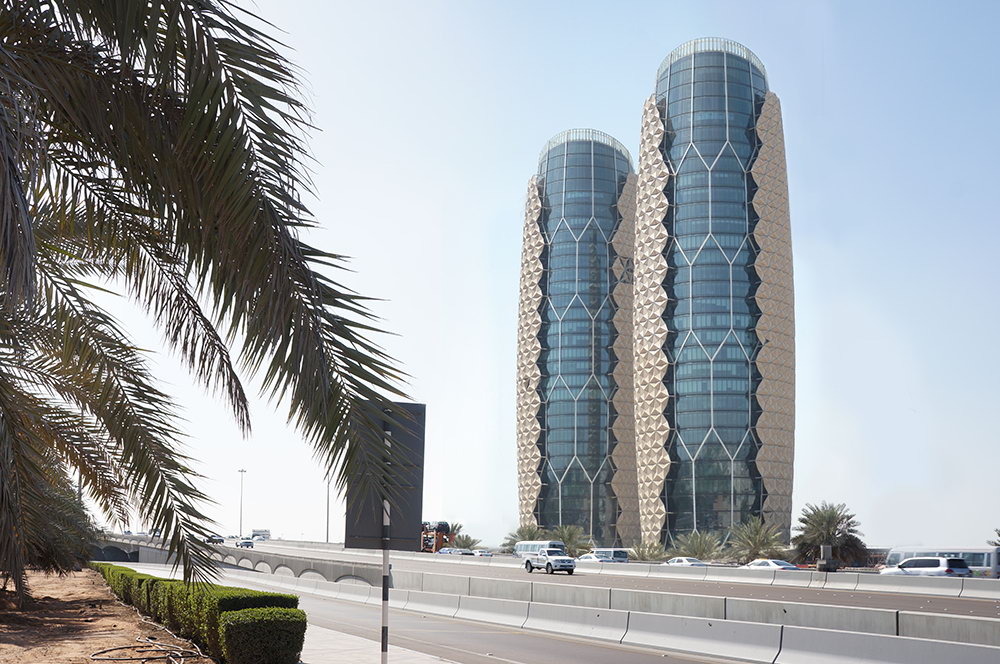 Characteristics of the project:

The project has been regarded by industry as the world’s top ten high-risk projects which is another classic project after the Bird’s Nest and Water Cube in Yuanda history which makes Yuanda regarded with the special respect by manufacturing technology in the world. The most difficult is it’s the only one unique sun-shading system of manufacturing; the difficulty of processing is comparable to the manufacture of nuclear submarines and spacecraft. The unique chrysalis shape of the whole project, the combination of accumulating intelligent, environmental, energy saving, foremost design, to be a landmark building in local. 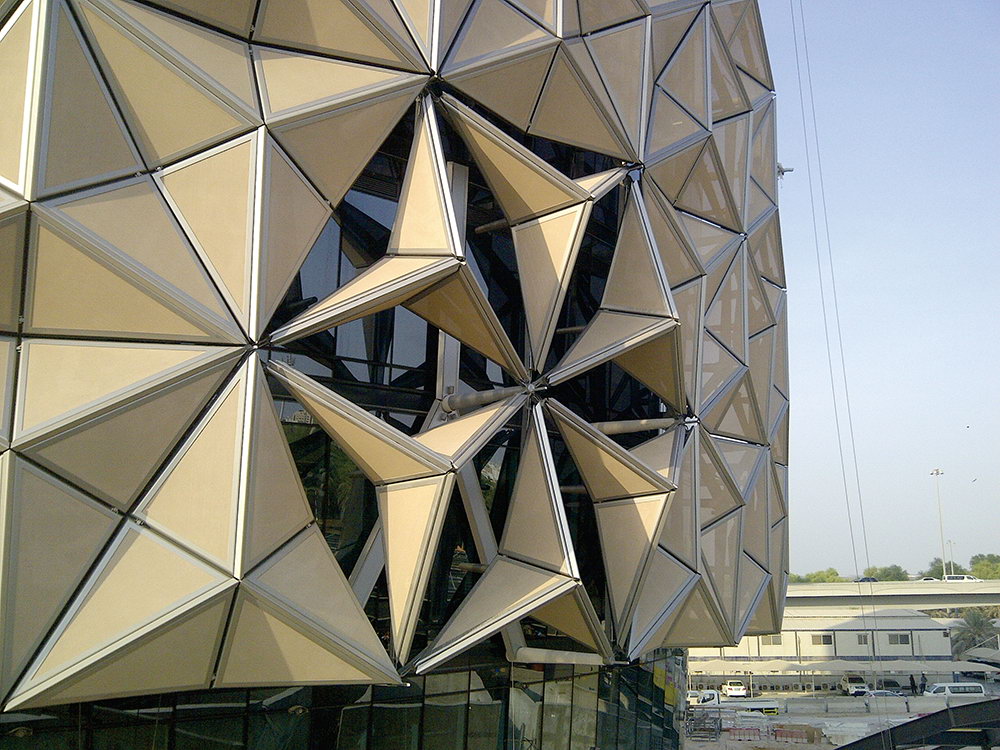 This building has its own unique difficulty on design, the diameter of two main building from the bottom along with increased height to gradually changing the chrysalis shape, with its unique shape adjacent to the coast. The Project uses Mashrabiya intelligent sun-shading systems, to subvert the traditional form of sun-shading, to combine organically together both the electronic mechanical and curtain wall, to create a new thinking on design. When building subjected to the direct sunlight, Mashrabiya system will be opening, to provide the sun-shading for the building. As the sun moving along the building, Mashrabiya gradually becomes the opening or closing situation along with the time, in order to realize the intelligent regulation for the internal temperature and light of the building according to the changes of external environment. Mashrabiya is assembled from hundreds of parts, all parts fit between the dimensions and tolerances, and material properties of different materials (strength, hardness, color fastness, chemical composition, etc.) are all factors to be considered.

Sun-shading system is the biggest characteristic of building in this project, because glass curtain wall is made of glass and metal structures, while the glass surface with its strong heat resistance and high thermal transmittance rate, so there is a great impact on indoor thermal conditions, in the summer, the sun through the glass into the room which is the main reason of overheating. Especially in the south hot areas, if the body is beaten by the direct sunlight again, it will feel hot and uncomfortable. The sun-shading system is set on the glass curtain wall, it will minimize the direct sunlight to the maximum, to avoid overheating indoor. It is one of the main measures of heat proof in hot areas. After setting the sun-shading, the following functions and effects are:
1) The function of sun-shading on solar radiation. The performance of thermal insulation of external structure is affected by many factors, of which the greatest one is the sun-shading coefficient. In general, the sun-shading coefficient is controlled by the characteristics of the material itself and environment. The sun-shading coefficient is a ratio of solar radiant heat on retaining structure both sun-shading system and non-sun-shading system. The smaller the sun-shading coefficient is, the smaller the solar radiant heat of external retaining structure is, the better the effect of the heat- resistance is.
2) Sun-shading effects on the indoor temperature. The sun-shading to prevent the indoor temperature raised as a significant role, the temperature of the amplitude value is smaller if sun-shading is working, the time of occurring the maximum temperature indoor will be delayed, the indoor temperature is uniform.
Therefore, the cooling load of the sun-shading on the air-conditioned room can be reduced, so as the air-conditioned building in which using the sun-shading that it will be one of the main measures for saving energy.
3) The effect of shading on lighting, from the point of view of natural lighting, the measurements of shading will block the direct sunlight, to prevent the glare; in order to distribute the illumination more evenly indoor, assist on visual work. As the surrounding environment, the shade can distribute the reflected light of glass (especially the coated glass), to avoid the light pollution coming from the glass reflector in large area.
4) The effect of shading on exterior building. Generally, the people is considering that the design of curtain wall is for the flat panel only, not able to design for the external shading or shading measurements, however many of the cases from abroad we can find that metal curtain walls can be designed to be lightweight metal plate form and become a beautiful shade of an interesting architectural style part. In Shading system, the shadow effect is formed on the glass wall of the appearance of the glass curtain wall, reflecting the modern architectural art aesthetic effect. Therefore, the exterior shading system is regarded as a type of flexible facade element in the European construction industry, and even called double facade forms. One is the facade of the building itself, another is a state of dynamic shading facade form. This "dynamic" construction image is not a fashion requirement on building facade, it is new type of modern form of building that the modern technology is to solve the building saving energy and demands on enjoying nature for human. It is different from the old shading system, the intelligent shading system for this project comprises of shading panels (aluminum frame + shading film), electrical and intelligent control system. The software of controlling is one part of intelligent shading control system, complying with the hardware of controlling system, to automatically adjust the shading panel, or changing the area of shading, or changing the angle according to the surrounding natural environment, the line of system. The advantages of them are blocking heat radiation, reducing direct sunlight, avoiding the glare, saving energy by using the natural sunlight.
The architectural features of the project determine the size of each sunshade are not the same. The processing size, angle, and size of supporting rod for aluminum frame caused by umbrella structure forms which are determined by a three-dimensional modeling. If the design is working by traditional ideas, the computational task is tremendously huge. Basically it is the impossible task. Finally, we hired a professional designer in Europe for program design from multiple research on this problem. To making a three-dimensional programming design for the sunshade of this project used by INVENTER third-party design software, the speed of design will be greatly improved. Meanwhile, through INVENTER three-dimensional design software, we can conveniently verify the status of sunshade in any location. To be able to dynamically observe the operating status of all agencies, to make sure the accuracy of the design. The project information made by INVENTER stored up to above 300GB, we can see how great this work!
View the embedded image gallery online at:
http://www.yuandacn.com/index.php/en/projects-cn-2/154-overseas/middle-east/united-arab-emirates/225-adic-2.html#sigProIdaebac06e1d
﻿